Home » Controversy Series » Part 2d: What Are the Terms? Decalogue

Ten Commandments/Decalogue. The Ten Commandments, or Ten Words, are the major part of the engraved covenant given to Israel by God from Mount Sinai shortly after the Exodus (Ex 20:1-17). “The Decalogue provides the basis for the covenant with all of Israel.”[i] The prologue identifies the parties to the covenant—the Lord God who makes nations bow to His will and the formerly enslaved and now redeemed Israelites who are to serve a new Master—and it is followed by ten laws. This collection of laws attains special status since they were specifically inscribed on stone by the hand of God and called the “Ten Words” (Ex 34:28; Deut 4:13). The manner in which the Lord conveyed His message with lightning and thundering, and the unique presentation of a miraculously hewn document that capsulized the covenant between Israel and Himself, impressed the whole camp of the Lord’s cosmic authority. He is the sovereign God of heaven and earth, yet He is establishing a covenant agreement with the least of all nations for the sake of His promise to Abraham. The Ten Commandments (with the prologue) are essentially the core document of the Mosaic covenant, kept as it was in the ark of the covenant (Ex 25:16; Deut 10:2-5, 8). The idea of a “commandment” is to draw attention to the authority of the one issuing the command, and so all Israel was to obey all the commandments of the covenant, both ethical and cultic commands. Moses introduced the engraved law and covenant as “testimonies, statutes and ordinances” (Deut 4:13-14, 44-45; 5:1), so the laws of the Decalogue are no different than the rest of the laws of the covenant and one will find that ceremonial laws are also considered to be “commandments” (Lev 27:34; Deut 1:3; 11:22; 19:9). While the form of the Ten Commandments lends itself to catechetical instruction or memory (Jer 7:9; Hos 4:2; Matt 19:17-22; Rom 13:9; cf. Lev 19:1-18; Deut 27:15-26), they far from dominate either OT or NT ethical lists or summaries. “The commandments of the Decalogue are rarely cited in the OT.”[ii] “In what respect exactly the ten commandments differed from the Book of the Covenant in terms of content is nowhere explicitly stated.”[iii] “Exodus 23 belongs to the Book of the Covenant, where the statutes and ordinances for the covenantal relationship are laid out, and these regulations can be considered as an explication of the Decalogue, which precedes them.”[iv]

There are no punishments—no legal recourses—stipulated within this document; however, there is a promise associated with the command to honor one’s parents. Most of the laws are couched as prohibitions. This collection of laws is a summary of the covenant the Lord made with Israel, “listing those areas of life where human conduct was intended to be shaped and enriched by adherence to the demands of living as a community of God’s people.”[v] “The focus is on protecting the health of the community, to which end the individual plays such an important role.”[vi]

When this list of commands is viewed superficially, the Decalogue is often considered to represent the minimum moral requirements to ensure that one’s life pleases God, but this is not to imply that obedience to the Ten Commandments will result in the salvation of one’s soul. “The giving of the law [the Ten Commandments] followed the salvation of Israel, and hence such obedience signified Israel’s grateful response to the redemption accomplished by the Lord.”[vii] Another view imagines that each commandment has a positive and negative duty that, when viewed in their totality, then encompasses every area of life. For example, not only should we not kill someone, we should also make effort to preserve human life. However, Jesus demonstrated the inadequacy of this view (Matt 10:34-29; 18:18-23; 22:35-40; cf. Isa 1:13-17; Mic 6:8). These two views often overlook three other features about the Ten Commandments: 1) they are a summary of the whole law that Israel was covenanted to keep, 2) the number and arrangement of those laws have symbolic meaning,[viii] and 3) the NT adds a new perspective about the law, and the Decalogue as a whole (2 Cor 3:6-4:6; Heb 7:11-12; 9:1-10; 12:18-24). See Moral Law and Noachide Law.

Individual commandments from the Decalogue are referenced positively in the gospels (Matt 5:21, 27; 19:18-19; Mark 7:10; 10:19; Lk 18:20), by Paul (Rom 7:7-8; 13:9-10; Eph 6:1-3; 1 Tim 1:9-11), and by other NT writers (Jas 2:11), so, as with all other Scriptures, are profitable for the man of God (2 Tim 3:16-17). At the same time, Paul provides a fresh view of the Decalogue as a contrasting type of the new covenant (2 Cor 3:6-18). “Paul has a certain view of the OT from the outset, as we can see in the very first reference to the ministry of the old covenant, where he already calls it a ‘ministry of death’.”[ix] Balla points out that Paul is not addressing the content of the law at this point, only the manner in which the two covenants were promulgated. However, Paul also emphasizes a liberty in the NT in contrast to the “veil” of the OT that obscured a clear vision of Jesus Christ. Certainly this would include the Spirit’s revelation that Christ is the topic of many OT narratives and laws. Paul’s repeated use of katargeo (“done away” and “abolished”) in his letter to the Corinthians is similar to doing away with the “law of commandments contained in ordinances” that kept Jew and Gentile apart (Eph 2:15-22). As Henry summarized this liberty under the gospel dispensation, there is “freedom from the yoke of ceremonial law, and from the servitude of corruption; liberty of access to God, and freedom of speech in prayer.”[x] See Abrogation.

“Therefore, from the perspective of the new covenant, the Decalogue is understood not as a summary of moral law but as a symbol of a pre-Christ relationship between God and His people and a type of the more glorious new covenant.”[xi] 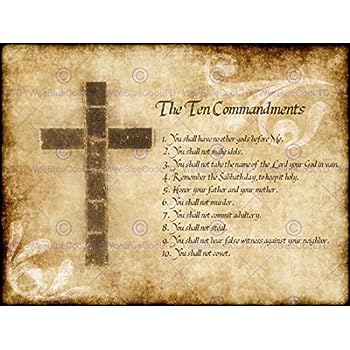 “The law is called the Decalogue, and the gospel is the doctrine concerning Christ the mediator, and the free remission of sins, through faith.”[xii] “When I say that the Ten Commandments are finished, I mean as a covenant document, or as the tables of the covenant.”[xiii] “In other words there is a sense for Christians that the Ten Commandments do not apply to them.”[xiv]

The Ten Commandments are often proclaimed to be a summary of moral law as opposed to a summary of the Lord’s covenant with Israel. For example, “A summary of this moral law, including, in general principle, all the duties which grow out of our relations to God and to our fellow-men, is presented in the Ten Commandments, engraved by the finger of God on two tablets of stone on Mount Sinai.”[xv] “The Ten Commandments, written by the finger of God on tables of stone at Mount Sinai, are the Lord’s summary of moral law, his definition of loving behavior.”[xvi] As with any assertion, there may or may not be evidence to back it up. And so this view is not without its detractors, who except the Sabbath as a moral commandment. Weirsbe states, “There is no evidence in Scripture that God ever gave the original Sabbath command to the Gentiles, or that it was repeated for the church to obey. Nine of the Ten Commandments are repeated in the church epistles, but the Sabbath commandment is not repeated.”[xvii]Rordorff’s review of early Christian literature discovered that “whenever we come across the use of the decalogue within the Christian Church, the sabbath commandment is always missing.”[xviii] Augustine excepted the Sabbath Commandment: “Well, now, I should like to be told what there is in these ten commandments, except the observance of the Sabbath, which ought not to be kept by a Christian…” Come the second millennium and Aquinas softened this distinction to say the Fourth Commandment was only moral in that “some time” be devoted to the worship of God. This was the historic view prior to the Reformation, and it was shared in part by Luther and Calvin. Luther’s Small Catechism is most succinct in advising, on the basis of the Sabbath commandment, “We should so fear and love God as not to despise preaching and his Word, but deem it holy, and willingly hear and learn it.”[xix] In contradistinction, Luther also said “the [NT] Scripture, which teacheth that all the Mosaical ceremonies can be omitted after the Gospel is revealed, has abrogated the Sabbath.”[xx] Bauckham explains that “Luther defends the Christian Sunday as a civil or ecclesiastical institution” as opposed to a divine command.[xxi] In his Institutes, Calvin agrees that the external observance of the Sabbath is typological and so was abolished; however, he adds that for Christians it means 1) we should cease from our works and allow God to work within us, 2) there should be a stated day to hear the Law and perform religious rites, and 3) servants “should be indulged with a day or rest, and thus have some intermission from labour.[xxii] “Like Luther, Calvin stresses that the institution of the weekly Sunday is a matter of convenience and order only…”[xxiii]

The Ten Commandments are certainly a summary of the Mosaic covenant which, from the perspective of the new covenant, is comprised of both moral and ceremonial laws (Ex 20:2, 12; 34:28, 29; Deut 4:13; 5:2-4, 15; 2 Cor 3:6-11; Gal 3:16-19; 4:24-26). “Equally importantly, [in the Decalogue] there is no distinction between the cultic and the social/ethical; they are simply fused.”[xxiv] Of all the cultic observances peculiar to the Mosaic covenant, the Lord chose the weekly Sabbath to be the identifying sign to accompany the other commandments that make up the Decalogue. But there is no legitimate rationale to support the assertion that the Ten Commandments were intended to be a summary of God’s moral law for all nations. This includes the presumption that Christ’s summation of the Mosaic covenant (loving God and neighbor) is a compendium of the Decalogue. While the Ten Words are a convenient and concise list of mostly moral duties and it has served the church to inculcate moral instruction by it, the theological imprecision has led to confusion regarding the place of the Sabbath in Christian ethics. As such, the claim that the Decalogue is a summary of moral laws that by extension apply to all nations can only be true if all of the commandments are indeed moral laws. The burden of proof therefore is to demonstrate unequivocally that the Sabbath, as given to Israel, is a moral commandment, of the same ethical substance and character as the other nine. However, Shepard’s attempt to demonstrate this is quite inadequate and unconvincing.[xxv] “Certain expedients [were] contrived to bring natural law as close as possible to the Sabbath commandment, but by and large the Puritans abandoned as untenable the notion that the Sabbath law is wholly ‘natural.’”[xxvi] “Nor are the usual modern reflections on the Decalogue’s being universal in character, or ethically oriented, based on solid evidence.”[xxvii] “Hence it is of considerable importance that these commandments not be understood as eternally limited in scope or as ethical principles more important than any others that might be formulated.”[xxviii] “I repeat; the idea that the Ten Commandments constitute the ‘moral law of God’ is derived from the WCF, with absolutely no biblical proof.”[xxix] ”Cassuto observes that the sixth through eighth commandments are found in every civilized society yet are unusual here because of their absolute, unqualified form as abstract, eternal principles.”[xxx]

By The Sabbath Complete in Controversy Series on March 3, 2018.
← Part 2d: What are the Terms? Ceremonial Law Book Review of “Tablets of Stone” by John Reisinger →